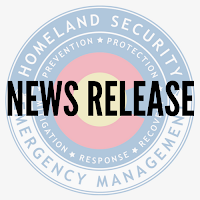 The highlight of the conference is the annual awards ceremony recognizing the efforts of emergency managers and first responders from across the state. The awards include: Emergency Manager of the Year, Volunteer of the Year, Rookie of the Year, Mike Gelski Award for Outstanding Service and a Public/Private Partnership Award. The San Luis Valley (SLV) Region efforts were well represented with four of the statewide awards.

Richard Wetzler from Costilla County received both the Volunteer of the Year Award and Mike Gelski Award for Outstanding Service. Wetzler is an active member of the Alpine First Response Team at Forbes Trinchera. He is a committed member of the SLV Citizen Corps almost since inception. Wetzler is a gentle, kind and humble spirit who represents a wonderful volunteer spirit.

DHSEM congratulations each of the award recipients and thanks them for representing this special region.

Regional All Hazards Emergency Manager of the Year Award: This CEMA award is open to all of the nine all hazards regions and is based on career achievement, overall contribution, regional coordination, specialized projects or proven leadership in the field of emergency management.

Volunteer of the Year Award: Award is given by Colorado DHSEM to one outstanding volunteer in each region of the state.
at 3/10/2017 04:15:00 PM