Nominations for FEMA's 2011 Individual and Community Preparedness Awards is now open and will close on August 26.  There are 16 achievement categories for accomplishments from January 2010 through May 2011.  Winners will be announced in September, during National Preparedness Month, and will be honored guests at an event in D.C. with one winner being selected to attend the 2011 International Association of Emergency Mangers Conference in Las Vegas.
Throughout Colorado, success has been demonstrated in each of these categories, please take the few minutes needed to nominate individuals or entire programs from your jurisdiction that have increased the level of disaster preparedness.

All applications and supporting materials should be sent to citizencorps@fema.gov with "2011 FEMA Individual and Community Preparedness Award Application" in the subject line.
at 7/29/2011 02:25:00 PM

The Colorado Department of Emergency Management would like to remind you of three training opportunities quickly approaching.

This is a required course in the FEMA Advanced Professional Series (APS).  For more info contact Robyn Knappe.
The course is intended for emergency managers and related disciplines.  Learn how to rapidly and effectively collect damage and impact information in the community immediately following a disaster.  The emphasis is on lifesaving and prioritization of resource allocation.


Evacuation and Re-Entry Class (FEMA G358)
8/16-8/17 Pueblo, CO
This 1.5 day course is intended for those responsible for writing evacuation and re-entry plans and procedures and for those executing the evacuation plans.


The Federal Emergency Management Agency (FEMA) Emergency Management Institute (EMI) will host a webinar for anyone who has responsibility to provide training.  It addresses the practicalities of conducting successful classroom interactions and making presentations.  In addition, the webinar will cover the basics of adult learning and provide job aids/checklists.

Course Goals:
At the completion of this training, participants will have a basic knowledge of:

Email ThisBlogThis!Share to TwitterShare to FacebookShare to Pinterest
Labels: training

Are your home and belongings properly insured should a disaster strike? The Colorado Department of Regulatory Agencies' (DORA) Division of Insurance has created a useful guide detailing actions homeowners may take to prepare them for such a scenario. When was the last time you took an inventory of your belongings and stored this information where you would be able to access it after a disaster? This, along with many other insurance tips are available in the guide. Evaluating an insurance policy is too often done post disaster, determining what your insurance covers and what it does not is an invaluable exercise that can streamline a family's ability to recover should a major event impact them. The DORA guide below offers information which can be helpful for preparing for the next event and guaranteeing your home and belongings are properly insured.
You can view or download additional copies of the DORA guide online.
at 7/18/2011 08:35:00 PM

The next meeting of the Colorado Emergency Planning Commission (CEPC) will be held at the Division of Emergency Management on July 20th. Click here for Agenda.

The legislation required each state appoint a State Emergency Response Commission to implement the act in their state. In Colorado, the Colorado Emergency Planning Commission (CEPC) was created. It is made up of the following statutorily required members representing the Colorado Department of Public Health and Environment - Hazardous Materials and Waste Management Division, the Department of Local Affairs - Colorado Division of Emergency Management and the Division of Local Government, the Department of Public Safety - Fire Safety Division, and the Colorado State Patrol. These representatives are permanent members of the CEPC. The balance of the CEPC is made up of representatives appointed by the Governor and serving a two (2) year term from the following areas: Two (2) from affected industries, two (2) from local governments and two (2) from the public interest or community groups, and one (1) from the Local Emergency Planning Committee (LEPC) community.

The CEPC implemented the act by designating Local Emergency Planning Districts (LEPD) and then requesting nominations from those districts for appointing Local Emergency Planning Committees (LEPC). Each LEPC has the charter of implementing the SARA/Title III requirements for their LEPD. These requirements include developing and publishing a hazardous material emergency response plan for their area, the creation of Right-To-Know procedure for their LEPD and monitoring of specific yearly hazardous materials reporting requirements.

The CEPC conducts several various activities such as an Annual LEPC Conference, training programs and grant programs. For more information on any of these programs please contact your LEPC chair. If you do not know who you LEPC chair is, please contact Jack Cobb at (720) 852-6603 or via email at jack.cobb@state.co.us These meetings are open to  the public and all LEPC members, local government representatives, and interested citizens are invited and encouraged to attend.
at 7/14/2011 08:57:00 AM 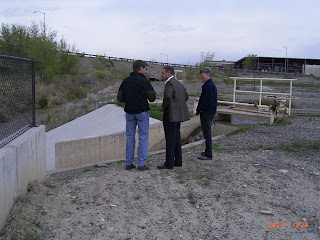 This article is the first in an on-going series of Successful Mitigation Projects in Colorado the Mitigation and Recovery Section of DEM will be issuing. The City of applied for a FEMA Pre-Disaster Mitigation Grant in 2005, the grant was awarded in 2006 and construction completed in 2009.

On April 30 this year Bret Guillory, Utility Engineer with the City of , led a tour of the project for Reeves Brown, Executive Director of the Colorado Department of Local Affairs along with Marilyn Gally and Deanna Butterbaugh of the Mitigation and Recovery section of the Division of Emergency Management.

The Ranchmen’s Ditch Flood mitigation Project, also known as the Big Pipe, was completed in April 2009 and was recognized as one of “Colorado’s Best of 2009” by the Colorado Association of Stormwater and Floodplain Managers (CASFM), taking second place in the statewide award competition.

The Big Pipe project removed 380 properties from the 100-year floodplain along and just south of and around the Mesa Mall, improved water quality by constructing stormwater detention basins, and covered the hazardous open irrigation flow alongside , a major east-west transportation artery in the City.

The project was the culmination of a 10-year effort which began with significant flooding along 25 Road in the summer of 1997 (estimated at less than a 50 year rainfall event).

The Big Pipe was constructed in three phases by Scott Contracting of , Mendez Construction of Grand Junction and Arapahoe Utilities and Infrastructure of Denver, CO at a total cost of $16.7 million.

The design for the Big Pipe Project was completed in house by Project Engineer David Donahue and Engineering Tech Jonathan Hobbs. ICON Engineering of Centennial, CO completed all hydrology and routing, FEMA submittals, Benefit Cost Analysis for the PDM grant, and independent verification of City design. This project also included coordination with a number of outside agencies, the Colorado Division of Emergency Management's Mitigation Team, US Fish & Wildlife, the US Army Corp of Engineers, FEMA, FAA, Bookcliff Country Club, Grand Valley Water Users & Bureau of Reclamation, Xcel Energy, Ute Water, Bresnan, Quest Communications, and a number of business owners along the project alignment.

The improvements were put to the test on August 16, 2010 when the drainage basin received what is estimated to be a 50 year storm event. It is estimated that, just east of the Mesa Mall, the system carried close to 700 cfs during this event. The capacity of the infrastructure at this location prior to the project was 119 cfs. There was no local flooding witnessed along the length of the project during the event. 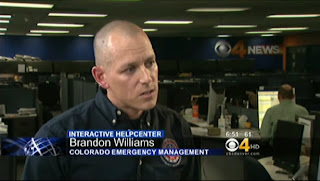 Brandon Williams, the Public Information Officer (PIO) of DEM is moving on in his career. Brandon worked tirelessly to improve communications not only with the public, but also within state agencies and among information officers. Brandon brought DEM’s information delivery into the 21st Century, utilizing both new technology and procedures. He championed that state agencies improve coordination of preparedness information, training, and exercises to deliver consistent messages to the public and lessen the burden on the local emergency management community. Brandon worked to establish joint information centers, regional information officer teams, and for inclusion of private partners in the PIO association. He leaves a firm foundation for DEM to continue to improve information delivery in Colorado. Everyone at DEM, the Department of Local Affairs, the emergency management community, the information officer community, and the citizens of Colorado says “Thank you, Brandon” and wishes him good luck in his continued career.
Brandon will continue to serve the Colorado community as a Public Information Officer within the Colorado Department of Public Health and Environment Prevention Services Division. He will increase public awareness on healthy living, a message close to Brandon's heart.
Photo Source: CBS4 News 5/24/2011
at 7/01/2011 09:42:00 AM