Morning Update – Thursday, May 31, 2012
Pagosa Springs, CO – Light smoke settled in the area of Pagosa Springs this morning from the Little Sand Fire. Yesterday crews working on the southeast portion of the fire (Division Y) experienced increased fire activity late in the afternoon which put up smoke that was visible from Pagosa Springs.

Yesterday’s Progress:
The structure protection group worked on the northeast area of the fire (Division A) removing brush and trees from around structures. This work is being done as a precautionary effort to create defensible space around homes and structures in the area. Crews worked in the public fuel wood area near Sportsman’s Campground removing limbs and ladder fuels. Ladder fuels provide vertical continuity between the forest floor and tree canopy, thereby allowing fire to carry from surface fuels into the crowns of trees or shrubs with relative ease. These fuels help initiate and assure the continuation of crowning.[1]

Burnout operations were successful on the southwest side of the fire. Winds were present but were not a major factor.

Div A - (upper northeast)
Crews will be in patrol status, continuing to work on and around structures. The work will include delimbing of trees and removing ladder fuels from around structures in the area of Sportsman’s Campground. Crews will also be working the spot near Trail Ridge Road (639) which is mostly a ground fire and not in the trees. Improvements and holding at Forest Service Road 639 will continue.

Div B – (southwest side)
There was growth on the southwest side of the fire, however the line is holding. Firefighters will continue to hold the line.

Div Y – (upper northwest)
This division will be monitored by air. Due to the heaviness of the tree canopy, ground observation is not possible.
Closures of roads, trails and campgrounds can be found at: www.FS.USDA.gov/sanjuan/

Fire Stats at a glance: 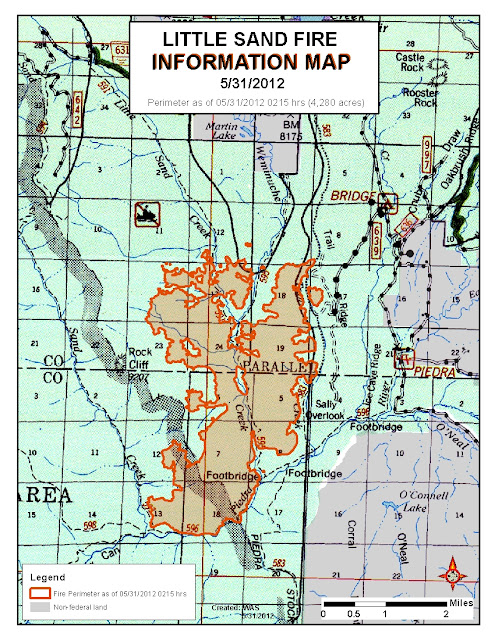