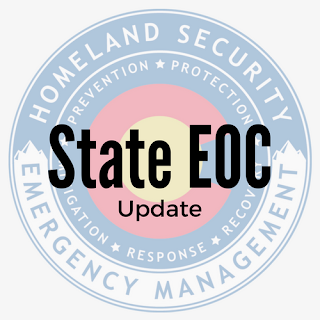 Effective today, May 6, 2019, the Colorado State Emergency Operations Center (SEOC) transitioned to Level II operations  to support planning and mitigation efforts for potential flooding in Hinsdale County. Level II operations means a situation or threat requires coordination with one or more additional state agencies. DHSEM Command and General Staff will occupy positions in the SEOC in addition to representatives from one or more state agencies and/or non-governmental organizations. Notification is made to all remaining state agencies and other support organizations to be on standby for activation.

Hinsdale County declared a local emergency on May 7, 2019.

In February and March 2019, Hinsdale County experienced numerous avalanches that created debris fields in drainages. The debris included soil, rock and trees up to 400 years old. In April 2019, local officials discovered several debris fields within Henson Creek, which contains two 100+ year old historic dams. While both dams are no longer in service, and have been partially breached to allow water to flow, concerns were immediately raised regarding the potential for the large volume of debris to plug the breaches. The structural stability of both dams is in question, however it is expected that both could retain a substantial amount of water before failing. A dam collapse would send flood water toward Lake City, which would reach the community within 10 to 15 minutes.

DHSEM, along with other state agencies, have been providing technical assistance and guidance to Hinsdale County officials since February.  The verbal declaration by Governor Polis today allows the SEOC to use disaster emergency funds and the resource mobilization plan to provide support to the county.