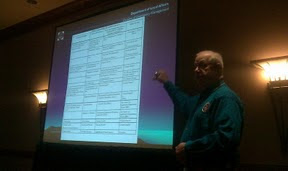 This presentation sought to clarify nuances with regard to the agency having jurisdiction on a critical incident or expanding emergency. Chuck started by clarifying that you cannot do the job of emergency management without considering on how authority is defined. Citing at the County level, then authorities are delineated by county commissioners through statutes/resolutions or in the city/municipality through ordinances. Agency, on the other hand, is not as clear. There are a number of people that roll into any party. How do you sort it out?

Take for example a building collapse. Why? Who controls? Fire/first responders? Crime scene? law? Building officials through a building code... if it exists? Public health if there is asbestos? Who owns an incident? High water, mudslides, avalanche, wildfire, road closures, structure fire, building collapse, public health, each presents a unique set of partner agencies and authorities.

So, how do we in Colorado fight through this issue? Division of Emergency Management. field representatives do this by helping identify the location of incident, nature of incident, principle responding agency and policy group. To varying degrees, similar though processes have been pursued at the local level and then adopted through statute or regulation. It is necessary to do this at the local level in Colorado prior to an incident because we have a myriad of special districts, home rule, and responsibilities. It is paramount to consider this prior to an incident.

Appointing command is not the same as conveying authority. There are legal considerations and steps that must be taken to ensure that once a decision has been made, it is subsequently codified. It is easier to do this in a conference room, with a form and issue papers, versus in front of a burning building. This also takes an ego check to make sure it happens smoothly and outside the issues of rank and on-site command.

We, in incident command systems or emergency management, say that agencies get checked at the door, but does this really happen? are there job obligations, conflicts and chains of commands the span or bleed the lines? Are there legal obligations that might be crossed in assuming an incident command role with respect to their home agency? Now... can you explain that in front of a jury, can you make it understandable to laypersons? These considerations should function as the motivators for you to consider these issues prior to an incident. Keep on mind you cannot assign statutory authority, such as in the case of a Sheriff. Only by statute change or ordinance/chartered can temporary command authority be delegated. Experience shows, too, that this is worth careful consideration prior to an incident because there are a number of multiple jurisdiction authorities. These existing delegation of authorities or combinations of authorities should be considered in advance.