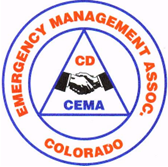 Two CEMA members provide a nomination letter about the Regional or Rookie Award nominee. This letter will state the reason why the nominee should receive the specified award.

The Rookie of the Year should have been in the position for two years or less.

The CEMA Awards Committee will accept nominations from the general membership not later than thirty (30) days prior to the Annual Meeting to recognize contributions to the field from each of the nine all-hazard Regions within the State of Colorado. Awards are to recognize one or more CEMA members, regardless of membership status, who has contributed significantly to the Association and/or overall emergency management within the State of Colorado during the preceding year.