I think our Finance and Admin Lead here at DEM summarized today's exercise activity well when, on the way out afterwards, he said "well.. we got requests, we filled requests... and we spent a lot of [fictional] money".  Out of context, that might not sound like a great achievement, but for a state-level Emergency Management office responding to a large, mega-scale disaster exercise scenario that is a proud achievement.  Our task at the Division, when you boil everything down, is pretty clear.  Emergency managers at the State-level are in place to anticipate needs of local authorities/first responders, field requests for equipment, staff or other assistance locals cannot meet with their own resources in responding to an emergency, and to facilitate access to funding streams so that money doesn't become a roadblock to providing help to people that need it.  So, in this case, getting requests, filling requests and responsibly spending fictional money means that the system - while under a HUGE amount of stress - worked.

That said.  We broke a lot of things (not physically...).  That sounds bad but, again, it isn't.  An exercise where everything works achieves little.  Exercises are intended to identify weaknesses, gaps, and those things you didn't think about yet.  The point is to see how capable and flexible you - as a group and individuals - are to responding to challenges.   In this exercise, We tested new procedures and groups, such as a dedicated situational awareness unit.  We implemented new systems, such as a wide establishment and operation of a shared collaboration site to facilitate communications between public affairs reps involved in response.  We utilized an entire new resource ordering and tracking system, designed to help better understand requests received, status of approval and implementation.  Our goal, which was painfully achieved (poking fun...) due to the rigorous injects and pace of our Emergency Management Institute exercise hosts, was to stress the system, see where the breaks occurred so that we could repair them in the after action phase. 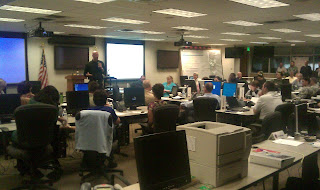 The scenario, if you are interested, was for a swarm of major tornadoes to hit across the Front Range causing catastrophic damage and countless secondary issues designed to overwhelm every aspect of initial and emergency response/support.  Achieved.  It was a difficult, long day.  Despite the horrific scenario and doubtless adverse impact such an event would have, we were able to test the systems, establish a rhythm and validate many procedures that would be necessary to help us organize to begin the process of communicating with and coordinating provision of resources to local responders and communities.  The skeleton got bent, battered and twisted, but it didn't break.

Of course, we aren't done, yet.  Today was only the first part of a two-part exercise.  While today's activities emphasized response, situational awareness, public information and warning, tomorrow's exercise activities will focus on recovery.
at 10/21/2010 06:38:00 PM